The Global Earth Healing Project goes to the second round. For the first optimisation on 1st Dec 2013 more than 200 TimeWaver users worldwide took part and vibrated the qualities of love, compassion, wisdom and coherency into the consciousness field of humankind. Many users could not take part because they did not yet have the recent TimeWaver 2014 software version.
For this reason we did not use the announced 1st Jan 2014 for the second optimisation. By now the most recent software has been distributed to all users so that we expect a considerably larger number of participants for the next optimisation on 1st Mar 2014 at 12.00 o’clock.
Please click on the button below to download the new optimisation list including the client „Consciousness of mankind“ and then import it to your TimeWaver software. The collective optimisation is already included and activated as an optimisation list with an individual optimisation. Also this time you can use this optimisation list or alternatively add an individually analysed optimisation to this list via the function „Analyse“. Please install the TimeWaver 2014 software before the import.
At the TimeWaver World Congress 2013 Dr.Treugut and me announced that we would like to work together with Roger Nelson’s Global Consciousness Project (GCP) and that we are eager to see whether the 84 noise generator which were placed all over the world by him, react to our optimisation. Since the TimeWaver also contains three noise generators, reciprocation with the GCP-network seemed possible. For many years the graphics of the GCP network have very reliably mirrored events which cause strong changes and activities in the global human consciousness e.g. big spiritual events such as the Kumbha Mela in India and mass-mediations; or events like the death of Lady Diana or September 11th.

And indeed the accumulated data of all 84 noise generators of the GCP network show the beginning of a distinct deviation from the expected value at exactly 12.00 o’clock on 1st Dec 2013 and 24 hours later on 2nd Dec reaches its peek which lies above the 99% limit of the confidence region. This means that the probability that this event happened by chance lies below 1%. Exactly the same increase occurs again two days later and again exceeds the 99% limit on 6th Dec. In a setting of +/- 2 months such a significant event is unique. It is an indication that our collective endeavour on 1st Dec 2013 was successful and that it is a nice encouragement to continue the project emphatically.

In the following chart the black arrow points directly to the beginning of the increase of the GCP curve at 12.00 0’clock on 1st Dec 2013. 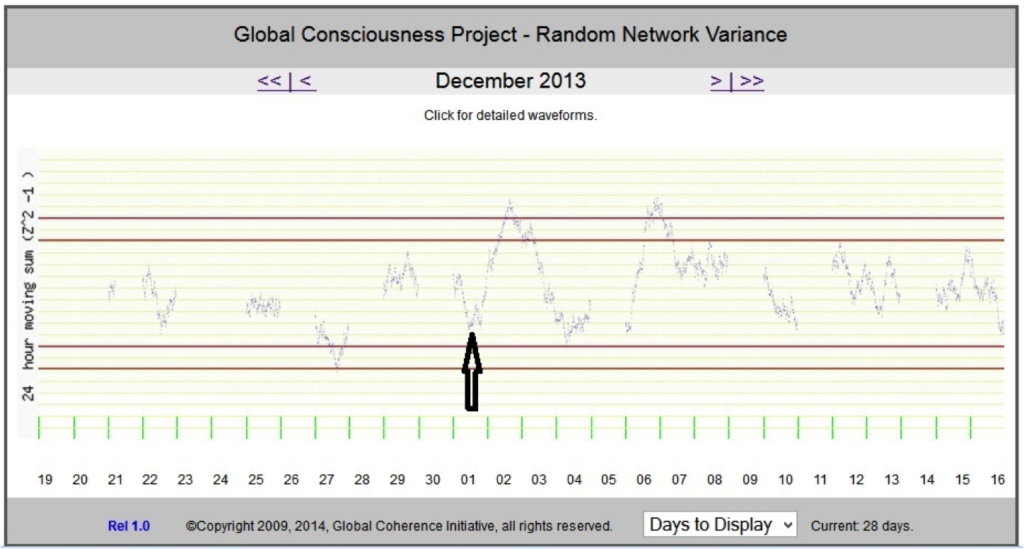 The following detailed view shows how the effect sets in at 12.00 o’clock:

This result is also an interesting indication that an information field optimisation goes beyond the limits of a physical conception of time since the participating TimeWaver users were in many different time zones and still the increase manifested at 12.00 o’clock in the time zone of Princeton. My conviction that optimisations with the TimeWaver can also reach the past and future, as it is applied in the Timeline module, is thus supported.

Yesterday I received an email by Roger Nelson: „Nice to hear from you. I like the GEHP idea and hope it will have the intended effect“.

We received the following feedback from two users: „We have been following the news with excitement since 1st Dec 2013 and found positive developments which were at least notable, e.g.:

I am convinced that we can make a modest but substantial contribution to making the world a little bit better.
Please send us a short confirmation email if you take part in the second GEHP optimisation on 1st Mar 2014: GEHP@timewaver.de