After a one-year break the fourth optimisation of the GEHP took place on 1st July 2015 – this time in an environment of latent but actively lingering conflicts just like in the Ukraine, the near East and here in Europe the crisis in Greece. Again more than 200 TimeWaver users – mainly in the German-speaking area but also worldwide – synchronised their systems for three minutes and vibrated the same optimisation lists into the global consciousness field of mankind. The focus was again on world peace, coherence, wisdom, love and the sense of responsibility of the powerful.

As usual, the optimisation took place at 12.00 o’clock CET. Since then positive signs on the way to more coherence and togetherness have been visible: an agreement in the Greece crisis and the long-awaited settlement of the nuclear dispute in Iran.

For this event, as well as for the last four optimizations, we observed the course of the Global Consciousness Project by Dr. Roger Nelson, which he and the Hearth Math Institute kindly provided and agreed to have it displayed here. 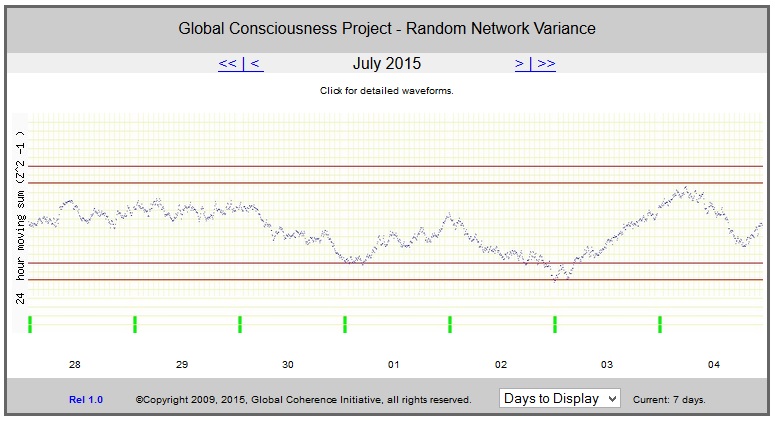 The course of the curve in June/July is quite active. At the time of the optimisation on 1st July around 12.00 o’clock the curve lies on the zero line which is a good point of comparison. Within the next 12 hours until midnight the curve rises slightly and then on 2nd July from 0.00 until 24.00 o’clock it continuously falls to the limit of the lower 99% confidence interval.

So we have a similar course as on 1st August 2014 during which the curve also fell to -99%. On 1st August, however, this took place within the first 12 hours. Here we see the same movement but delayed by 12 hours.

In summary, during this GEHP optimisation we again find a burst out of the 99% confidence interval within 36 hours. Yet, this time it is not as distinct and delayed by 12 hours in direction to the negative. Thus the optimisation is mirrored here, but less distinct than during the first three events.

In this connection I would like to mention Roger Nelson’s advice that one individual correlation itself is not significant, but only the consideration of a great amount of data allows to conclude with certainty on a deviation from coincidence. We are not looking for a strictly scientific proof, but primarily for a qualitative correlation or communication between the Global Consciousness Project and the Global Earth Healing Project, because both systems can, from a technical point of view, be described as similar networks which are noise processes connected through consciousness.

I hope to contribute to more coherence, mutual understanding and peace with the next collective optimisation on 1st October 2015.