The goal of the GEHP balancing on Christmas Eve 2017 at 12.00 o’clock was to bring positive change into the dubious conflict situation between the USA, under the leadership of Donald Trump, and North Korea, under the leadership of Kim Jong Un. Such a conflict, which potentially affects the whole of humanity, can never be seen only as the problem of a country or a despotic ruler, rather we can see it as an external mirror of an attitude in the collective unconscious of humanity as well. The information field is the scientifically describable and technically accessible aspect of this depth level of the global human field of consciousness. Balancing with a focus on such a source of conflict therefore affects the Information Field of each individual and can potentially have a great impact.

As with all previous balances of the GEHP, we will again use the live data from the Global Consciousness Project, which summarizes and mathematically evaluates the noise data of more than 80 physical noise generators worldwide. The following diagram shows the deviation of the cumulative value from the horizontally central zero line of the expected value. 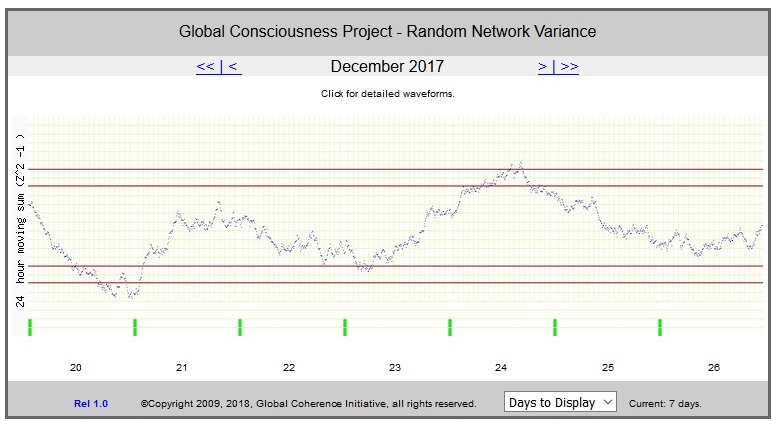 As with most of the previous GEHP balances, this trend also shows an upward increase in the value above the 99% confidence interval on 24.12.2017. This means that such a deviation has a probability of less than 1%. However, since it is Christmas Eve, it is suspected that such a deviation is to be expected on 24.12 each year, as many people are in an increased emotional state. However, a look at previous years does not confirm this assumption. With this GEHP balancing we again receive an indication that an impulse has been set in the global Information Field.

In fact, there seems to have been some movement in the deadlocked relations between North Korea and the USA. Although only the surface of the background negotiations can be seen, it is hopeful that Kim offered Trump to join a talk on nuclear weapons in early March, which he promptly accepted. Now a summit meeting between the two countries is to take place at the end of May, in which China will perhaps also take part.

In order to further support this process, which we hope will lead to more relaxation and lasting peace, we will accompany the talks at the end of May with a further GEHP balancing.